This past weekend, I was out at the Prime farm a little before 7 am. The plan was to have a relaxed fundamental drill day with a small contingent of the team which would allow a lot more one on one time. I like days like this because we can really focus on individual players and their techniques, get into the minutia of body mechanics and work muscle memory. Not only did we execute drills that emphasized quick target acquisition (short, medium and long range) but also footwork, hand switching and plenty of cardio. As we continued to perform these drills, we did them at a relatively fast pace. As we continued to push, I began to see a slight decrease in performance. Every so slight… someone wouldn’t keep their gun up, more cant to their gun than normal, a stumble from a surefooted player or they would stop in the middle of a drill to check off on something. Fatigue appeared to be setting in. Or perhaps, it was already there….

World Cup is coming and there is no doubt, based off Virginia Beach, it will be a dog fight. So, we need to prepare for the scenarios we may find ourselves in. Playing tired can lead to mistakes and mental errors. Sure, physical fitness training, good sleep, even good solid field walking can and most certainly will alleviate the issue. Bruce Lee use to say, “Knowing is not enough; we must apply. Willing is not enough: we must do.” So let’s do that here. But understand that, being “tired” doesn’t necessarily translate to just physical fatigue. As stated earlier, that can be addressed through a proper regimen of workouts. I’m talking mental fatigue. 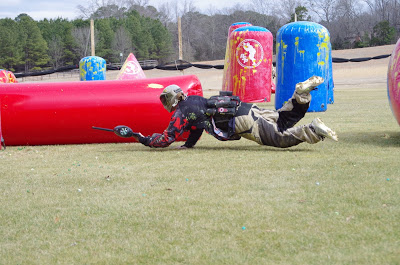 The mind does crazy things when it is tired and obviously paintball players (even though some of us may believe we don’t make mistakes and are legends in our own minds) are not immune. Physical fatigue can lead to mental fatigue and vice versa for that matter. Perhaps you had a particular stressful week at work, maybe you received some bad news or finances are tight, family issues, relationship issues, whatever the matter may be… these things can all lead to mental fatigue.

One of the things you learn when training in gun defense (we’re talking real guns here… the “bang bang” someone is dead kind) is you want to train in a “real” environment if you can. When I can, I like to elevate my heart rate to mimic the stress levels of a potential engagement. I will do a jog or wind sprints or even jumping jacks to get the blood really pumping and then see if I can effectively square a target. We want to make ourselves uncomfortable so that, God forbid, if we do find ourselves in a gunfight, we are not in too unfamiliar territory.

This is why I like to utilize drills that emphasize a multitude of skill sets. As I stated at the beginning, we did drills that emphasized, targeting, footwork, hand switching, gun stability and cardio… but we did it all in the same drill. I like drills that have a lot going on because they make the brain process a lot more than “hit the target” or “go here and do this”. It’s not just physical training but mental training. Any drill that can mesh the two and can change in dynamic in the middle of it is a great tool. Call it mental push- ups… or don’t. 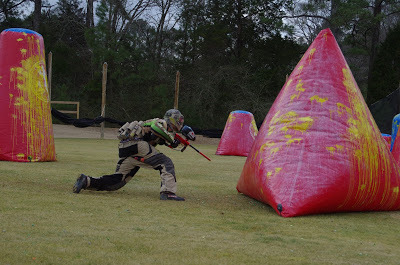 What are some of the drills you do that would fit in this category? Can’t think of any? If you can’t, you should know that you are a little behind the curve.

Try this one: Set up 3 targets in a “V” shape on one end of the field. These targets will each be assigned a number. For example, the back left target of the V is 1, the point of the V is 2 and the back right corner of the V is 3. Then, at the 50, set up two cones about 30 to 40 feet apart from each other. What you will do is run left to right between the two cones and vice versa 4-6 times. While you are doing this, a teammate calls out one of the numbers. You must put a stream of paint on that target on the run. This drill works cardio, footwork, (horizontal movement), hand switching, target acquisition and listening/comprehension.

See what I am talking about? There are several others you can utilize that “train the brain” so to speak. If you feel you have a great drill that “trains the brain”, post it up. Would love to know and understand what others do to improve their mental strength. 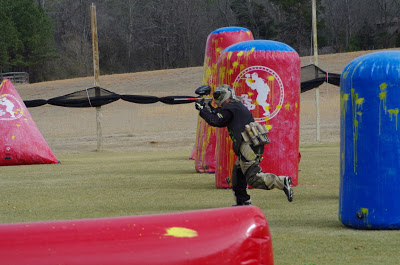 “Excellence is an art won by training and habituation. We do not act rightly because we have virtue or excellence, but we rather have those because we have acted rightly. We are what we repeatedly do. Excellence, then, is not an act but a habit.” – Aristotle

“The first virtue in a soldier is endurance of fatigue; courage is only the second virtue” – Napoleon

Ole Aristotle and Napoleon probably knew a thing or two about it, huh?

Be water my friends,

One thought on “Insane in the Membrane”